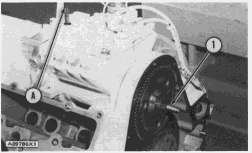 1. Remove the plug from the fuel injection pump housing and install timing pin (A).

2. While the crankshaft is turned clockwise (as seen from the front of the engine), push on tool (A) until it slides into the groove (slot) in the fuel injection pump camshaft. 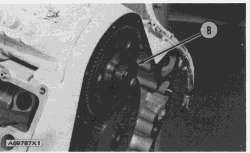 4. Install tooling (B) into the camshaft drive gear for the fuel injection pump. Turn both bolts evenly until the drive gear is free of the shaft. Remove tooling (B). 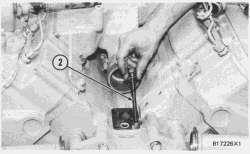 5. Remove thrust pin (2) that holds the camshaft in place from the rear of the cylinder block. 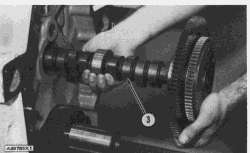 6. Remove the camshaft (3) and gears from the cylinder block as a unit. Be careful not to cause damage to the camshaft bearing or journals.

NOTE: The camshaft gear can be removed from the camshaft if a replacement is necessary. See the topic CAMSHAFT in the RECONDITIONING PROCEDURES. 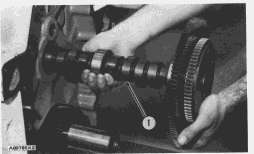 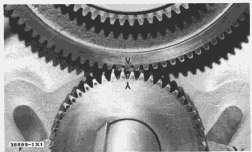 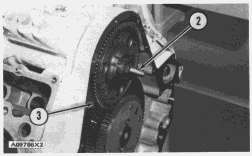 NOTE: For the correct torque, see the topic DRIVE GEAR FOR THE INJECTION PUMP in the SPECIFICATIONS.

4. After valve lifters and timing gear cover have been installed, check the timing as follows:

b) Turn the crankshaft clockwise as seen from the front of the engine approximately 1/2 turn. Install timing pin (A) again.

c) While turning the crankshaft clockwise, push on timing pin (A) until it slides into the groove (slot) in the fuel injection pump camshaft. 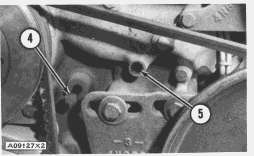 d) Remove the plug from the timing hole in the front cover and install a 5/16″-18 NC bolt (4) 2 1/2 in. long. The cover bolt from hole (5) can be used. Turn the crankshaft clockwise until bolt (4) can be installed into the timing gear and is in the center of the timing hole. The camshaft for the fuel injection pump is now in correct time with the engine. 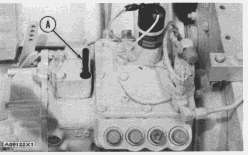 NOTE: If the bolt can not be installed in the hole of camshaft gear, the timing must be corrected as follows:

a) With timing pin (A) installed, remove the tachometer drive adapter housing and shaft.

b) Loosen the gear from the fuel injection pump camshaft. Turn the crankshaft clockwise approximately two full turns until bolt (4) can be installed. Install the bolt.

c) Install tachometer drive adapter shaft and tighten it to the correct torque. Install adapter housing. Remove the bolt and timing pin and install the plugs.

NOTE: For the correct torque, see the topic DRIVE GEAR FOR THE INJECTION PUMP in the SPECIFICATIONS.