Shutoff and Alarm Systems
Shutoff and alarm systems are either electrically or mechanically operated. The operation of all electric shutoffs and alarms utilize components which actuate switches in a sensing unit.

When any sensing switch shuts the engine down, the problem causing the shutdown must be corrected before attempting to restart the engine.

Familiarize yourself with the:

* types and locations of the shutoff controls
* conditions which cause each control to function
* resetting procedure required to restart your engine
Alarm switches consist of a sensor and contactor. Examples of sensors are the magnetic pickup for detecting speed, and the pressure and temperature sensors. Sensors are wired to contactors. The contactors activate alarm circuits in the Annunciator Panel.

Alarm switches are set at a less critical operating temperature, pressure, level, or speed than the shutoff components. The purpose of the alarm switches is to warn the operator that an unsafe operating condition is beginning to occur.

When an alarm is activated, corrective measures must be taken, before the situation becomes an emergency, to avoid possible engine damage.

If corrective measures are not taken within a reasonable time, engine damage could result. Alternatively, a corresponding shutdown device (if equipped) will stop the engine.

The alarm will continue until the condition is corrected or the alarm is reset by the operator. The alarm circuits merely warn the operator, they do not shut the engine down to protect it from damage.

A switch may be installed in the alarm circuit for silencing the alarm while the engine is stopped for repairs. Before starting, be sure the switch is moved to the closed (ON) position and the warning lights are illuminated.

If the switch is left in the open (OFF) position when the engine is started, the engine will not be protected.

A magnetic pickup mounted in the flywheel housing measures the engine speed by sensing the passage of the flywheel ring gear teeth. Should the engine speed increase above the overspeed setting of the Electronic Overspeed Switch (118 percent of rated engine speed), the magnetic pickup will sense the overspeed and send a signal to the Electronic Overspeed Switch (ESS). The ESS activates the fuel shutoff solenoid. 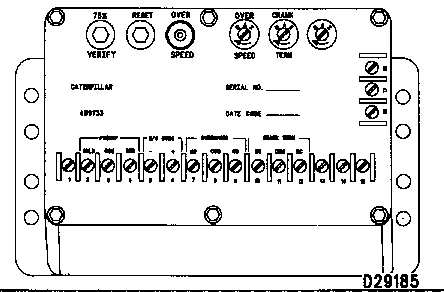 The Electronic Overspeed Switch (if equipped) is located inside of the engine-mounted junction box.

The overspeed shutoff must be reset before the engine will restart. A reset button on the ESS must be pushed to reset the overspeed switch.

The ESS with Crank Termination has a sensing circuit which prevents the starter pinion from remaining engaged in the flywheel at excessive rpm. Crank Termination is an adjustable engine speed setting that signals the starter motor when the engine is firing and cranking must be terminated. When this speed setting is reached, a switch closes to start the engine hour meter.

The circuit will remain open until the flywheel stops. This prevents activating the starter motor circuit again while the flywheel is turning.

Your engine may be equipped with either an Overspeed Shutoff Switch or an Electronic Overspeed Switch with Cranking Termination. Both switches can be checked for proper operation of the overspeed condition at 75 percent of overspeed rpm. Refer to the Service Manual for the testing procedure.

Engine Exerciser for Standby Units
The engine exerciser will start, run and stop the engine at preset times. This function ensures proper lubrication of engine parts and proper equipment operation when the standby unit is required.

Shutoff and Alarm System Testing
Most control panels are equipped with a lamp test switch. Turn the switch to ON position to check indicator lights for proper operation. Replace defective or burnt bulbs immediately.

The engine protective devices should be tested for proper operation every 1000 service hours or twice a year by authorized, experienced service personnel.

Abnormal operating conditions must be simulated which could cause engine damage if the tests are performed incorrectly. Refer to the Service Manual for the testing procedures.