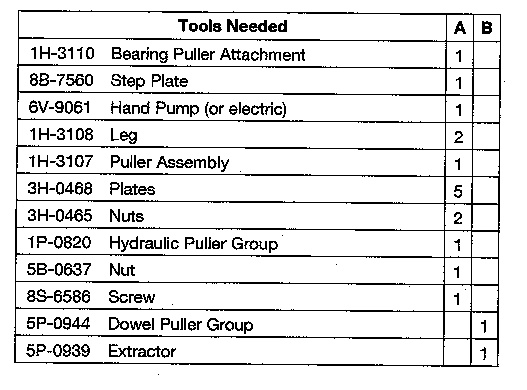 NOTE: Check the bearing caps for a number as to their location. If a number can not be seen, put a number on the left side of cylinder block and bearing cap.

2. Install one of the bolts from the front pulley in each end of the crankshaft.

NOTE: If new main bearings are not to be installed, keep old bearings with identification as to their location in cylinder block.

4. Use Tooling (A) to remove the crankshaft gear.

5. Use Tooling (B) if necessary to remove the dowel and the pin.

The serviceman must be very careful to use Plastigage, Tool (B) correctly. The following points must be remembered:

When using Plastigage, the readings can sometimes be unclear. For example, all parts of the Plastigage are not the same width. Measure the major widths to make sure that they are within the specification range. Also, experience has shown that when checking clearances tighter than 0.10 mm (.004 in) the readings may be low by 0.013 to 0.025 mm (.0005 to .0010 in). Out-of-round journals can give faulty readings. Also, journal taper may be indicated when one end of the Plastigage is wider that the other. 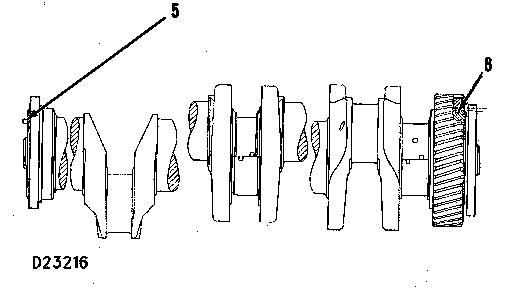 NOTE: The dowel in the crankshaft must be in alignment with the keyway in crankshaft gear (4).

5. Install upper half of main bearings (7) in the block.

6. Install one bolt for the flywheel on each end of the crankshaft.

NOTE: Be sure tabs (8) on back of the bearings fit in the tab slots of the caps and cylinder block.

9. Use Plastigage (B) to check bearing clearance.

13. Install the thrust bearings for No.4 main bearing.

NOTE: Install the thrust bearings with the side identification “BLOCK SIDE” toward the cylinder block. 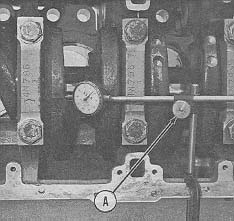