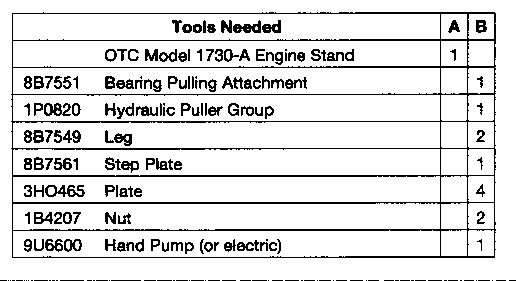 1. Fasten a hoist, and put the engine in position on Tool (A).

3. Remove bolts (1) and main bearing caps (2). Remove the lower halves of the main bearings from the caps.

4. Install two of the bolts that hold the flywheel in place in the end of the crankshaft.

5. Fasten a hoist, and remove crankshaft (3) from the engine. The weight of the crankshaft is approximately 54 kg (120 lb).

6. Remove the upper halves of the main bearings from the cylinder block.

7. Install Tooling (B), and remove the gear from the crankshaft.

3. Install the thrust bearing for the No. 4 main.

4. Install the upper main bearings (the bearings with oil hole) into the engine block.

NOTE: For more details about installation of main bearings, see the topic, “Remove & Install Crankshaft Main Bearings” in this manual.

The serviceman must be very careful to use Plastigage correctly. The following points must be remembered.

…Make sure that the backs of the bearings and the bores are clean and dry.

…Make sure that the bearing locking tabs are properly seated in their slots.

…The crankshaft must be free of oil where the Plastigage touches it.

…Install the bearing cap using the correct torque-turn specifications. Do notuse an impact wrench. Be careful not to dislodge the bearing when the cap is installed.

…Carefully remove the cap but do notremove the Plastigage. Measure the width of the Plastigage when it is in the bearing cap or on the crankshaft journal. Do this by using the correct scale on the package. Record the measurements.

…Remove the Plastigage before reinstalling the cap.

When using Plastigage, the readings can sometimes be unclear. For example, all parts of the Plastigage are not the same width. Measure the major widths to make sure that they are within the specification range. Also, experience has shown that when checking clearances tighter than 0.10 mm (.004 in)the readings may be low by 0.013 to 0.025 mm (.0005 to .0010 in). Out-of-round journals can give faulty readings. Also, journal taper may be indicated when one end of the Plastigage is wider than the other.

Do not turn crankshaft when Plastigage is in position to check clearance. 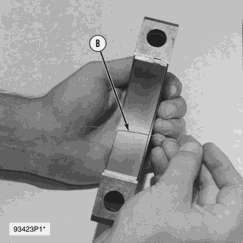 6. Check the bearing clearance with Plastigage (B). Put the lower main bearings into the caps. Put the caps in position, and install the bolts. Tighten the bolts in number sequence as follows: 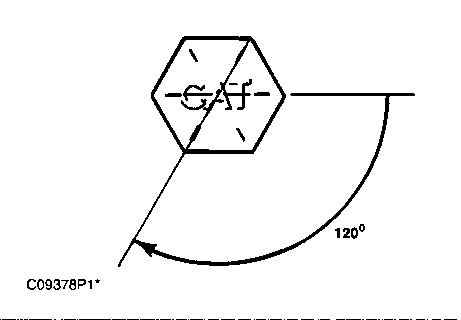 8. Put Clean Engine Oilon the bolt threads and washer faces. Put clean engine oil on the main bearings. Put the bearing caps in position, and install the bolts. Tighten the bolts in number sequence as follows: