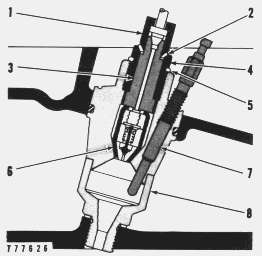 Fuel ratio control bolt (7) is connected by a slot in collar (3) and bolt (4) through the engine governor to the fuel injection pump rack. An air line from the engine inlet manifold supplies manifold pressure air to the chamber inside cover (5).

When the engine is accelerated, or the load on the engine increases, bolt (7) in collar (3) restricts the movement of the fuel rack until the turbocharged boost of air in the inlet manifold and inside the fuel ratio control cover (5) forces diaphragm (2) to compress spring (6). Compressing spring (6) moves bolt (7) which relieves the restriction from collar (3) and the fuel rack. This allows the fuel rack to increase the fuel as the turbocharged air pressure increases with the increase in engine rpm. The compressed force of spring (1) can be adjusted if it is necessary to correct the fuel-to-air ratio.

The hydra-mechanical governor has engine driven governor weights (12), governor spring (5), a hydraulic valve (13) and piston (14). The valve and piston are connected to rack (17) in the fuel injection pump housing. The engine lubricating oil pump supplies pressure oil through passage (16) and around sleeve (15) for the hydraulic operation of the governor. The accelerator pedal controls only the compression of governor spring (5). The compressed spring force always pushes to increase the supply of fuel to the engine while the centrifugal force of the engine driven governor weights are always pulling to decrease fuel to the engine. The governed rpm of the engine is when these two forces balance.

When engine load increases, engine rpm decreases and revolving weights (12) slow down. The weights move toward each other and allow governor spring (5) to move valve (13) forward. As valve (13) moves, an oil passage around valve (13) opens to pressure oil. Oil then flows through passage (7) and fills the chamber behind piston (14). The pressure forces the piston and rack forward, increasing the amount of fuel to the engine. Engine rpm increases until the revolving weights rotate fast enough to balance the force of the governor spring.

When engine load decreases, engine rpm increases, revolving weights (12) speed-up, and the toes on the weights move valve (13) rearward, allowing the oil behind piston (14) to flow through a drain passage opened at the rear of the piston. At the same time, the pressure oil between sleeve (15) and piston (14) forces the piston and rack rearward, decreasing the amount of fuel to the engine. Engine rpm decreases until the revolving weights balance the force of the governor spring.

Oil from the engine lubricating system lubricates the governor weight bearing. The various other parts are splash lubricated. The oil from the governor drains into the fuel injection pump housing.

The injection pump plungers and the lifters are lifted by lobes on the camshaft and always make a full stroke. The lifters are held against the cam lobes by springs.

The amount of fuel pumped each stroke is varied by turning the plunger in the barrel. Action of the governor moves the fuel rack which turns the pump gear segment on the bottom of the pump plunger.

The fuel system is a pressure type with a separate injection pump and injection valve for each cylinder. Fuel is injected into a precombustion chamber, not directly into the cylinder.

The transfer pump can supply more fuel than is required for injection, so a bypass valve is used to limit the maximum pressure within the supply system.

An air vent valve in the system permits removal of air. Air is removed by opening the valve and pressurizing the fuel system. The system can be pressurized by using the priming pump. The vent valve must be open until a stream of fuel, without air bubbles, flows from the vent line.

A. Part number of fuel injection pump and governor group. B. Identification number on housing. C. Location of part number marks on camshaft.

NOTE: If the part number of the fuel injection pump and governor group is not in the chart or if it has a different camshaft, make reference to the parts book, or to TECHNICAL PARTSGRAM; COMMON USAGE IN SLEEVE METERING FUEL SYSTEMS, 4 and 6 PUMP GROUPS, Form No. FEG00707.

Maximum permissible clearance between the bore in the housing and the sleeve control shaft (worn) … .003 in.(0.08 mm)

Maximum permissible clearance between the bore in the housing and the sleeve control shaft (worn) … .003 in.(0.07 mm)

NOTE: When installing sleeve on end of camshaft, support the camshaft to prevent damage to parts inside of injection pump and governor housing.

Maximum permissible clearance between the bearing and the camshaft bearing surface (journal) (worn) … .003 in.(0.08 mm)

Install spring washer with bent side towards the governor spring (5) as shown.

For the correct part number for the governor spring for the fuel injection pump and governor group, make reference to the following:

NOTE: If the engine has “surging”, install the 6N6901 Governor Conversion Group For Close Regulation (“Dashpot” Governor). Special Instruction, Form No. SMHS6762 has instructions for the installation procedures.

NOTE: If the spring keeps the pressure in the fuel injection pump housing above 25 psi (170 kPa) with the engine operating under full load, the spring is good.

Before starting the engine, the pressure on the pressure gauge (3) should be 3000 psi (20 700 kPa). When the starter control valve (5) is activated, the oil is pushed from the accumulator (9) by the nitrogen gas (N2). The oil flow is through the hydraulic starting motor (4), where the energy from the compression of the fluid is changed to mechanical energy for turning the engine flywheel.

The air starting motor is used to turn the engine flywheel fast enough to get the engine running.

For engines which do not have heavy loads when starting, the regulator setting is approximately 100 psi (690 kPa). This setting gives a good relationship between cranking speeds fast enough for easy starting and the length of time the air starting motor can turn the engine before the air supply is gone.

If the engine has a heavy load which can not be disconnected during starting, the setting of the air pressure regulating valve needs to be higher in order to get high enough speed for easy starting.

The flow of air goes through the oiler (2) where it picks up lubrication oil for the air starting motor.

The air with lubrication oil goes into the air motor. The pressure of the air pushes against the vanes (7) in the rotor (6). This turns the rotor which is connected by gears (9) to the starter pinion (8) which turns the engine flywheel.

When the engine starts running the flywheel will start to turn faster than the starter pinion (8). The pinion (8) retracts under this condition. This prevents damage to the motor, pinion (8) or flywheel gear.

When the starter control valve (1) is released, the air pressure and flow to the piston (10) behind the starter pinion (8) is stopped, the pinion spring (11) retracts the pinion (8). The relay valve (3) stops the flow of air to the air starting motor.

The starter motor is used to turn the engine flywheel fast enough to get the engine running.

A solenoid is a magnetic switch that uses low current to close a high current circuit. The solenoid has an electromagnet with a core (6) which moves.

Alternator (Delco-Remy)
The alternator is driven by V-type belts from the crankshaft pulley. This alternator is a three phase, self-rectifying charging unit, and the regulator is part of the alternator.

This alternator design has no need for slip rings or brushes, and the only part that has movement is the rotor assembly. All conductors that carry current are stationary. The conductors are: the field winding, stator windings, six rectifying diodes, and the regulator circuit components.

The rotor assembly has many magnetic poles like fingers with air space between each opposite pole. The poles have residual magnetism (like permanent magnets) that produce a small amount of magnet-like lines of force (magnetic field) between the poles. As the rotor assembly begins to turn between the field winding and the stator windings, a small amount of alternating current (AC) is produced in the stator windings from the small magnetic lines of force made by the residual magnetism of the poles. This AC current is changed to direct current (DC) when it passes through the diodes of the rectifier bridge. Most of this current goes to charge the battery and to supply the low amperage circuit, and the remainder is sent on to the field windings. The DC current flow through the field windings (wires around an iron core) now increases the strength of the magnetic lines of force. These stronger lines of force now increase the amount of AC current produced in the stator windings. The increased speed of the rotor assembly also increases the current and voltage output of the alternator.

The voltage regulator is a solid state (transistor, stationary parts) electronic switch. It feels the voltage in the system and switches on and off many times a second to control the field current (DC current to the field windings) for the alternator to make the needed voltage output.

Alternator (Motorola)
The alternator is a three phase, self-rectifying charging unit that is driven by V-type belts. The only part of the alternator that has movement is the rotor assembly. Rotor assembly (4) is held in position by a ball bearing at each end of the rotor shaft.

The alternator is made up of a front frame at the drive end, rotor assembly (4), stator assembly (3), rectifier assembly, brushes and holder assembly (5), slip rings (1) and rear end frame. Fan (2) provides heat removal by the movement of air thru the alternator.

Rotor assembly (4) has field windings (wires around an iron core) that make magnetic lines of force when direct current (DC) flows thru them. As the rotor assembly turns, the magnetic lines of force are broken by stator assembly (3). This makes alternator current (AC) in the stator. The rectifier assembly has diodes that change the alternating current (AC) from the stator to direct current (DC). Most of the DC current goes to charge the battery and make a supply for the low amperage circuit. The remainder of the DC current is sent to the field windings thru the brushes.